This SiteGround review evaluates all the critical stuff you’d like to know – from its main features to the pricing schedule, and notable weaknesses.

Some praise it for its excellent support and security. Others love it for its exemplary performance and uptime. And then there’s the group of users who argue that it’s the leading web hosting solution today.

Is SiteGround really that impressive? It has got to have a couple of drawbacks, right?

Well, one thing’s for sure. This is no ordinary web hosting service. It has been around for over a decade. And word on the street is- it means business. 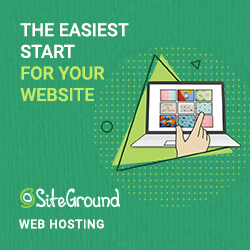 So, let’s find out what the business is really all about…

The journey started back in 2004 when a couple of university buddies seeking to push web hosting to the next level embarked on creating a robust hosting solution – which resulted in the launch of SiteGround in 2004.

Their principal goal was to set up a system that would be more secure, faster, safer, and with better support than other solutions. Consequently, SiteGround was built to expand beyond the typical web hosting service boundaries. It’s now renowned for its wide range of provisions- from WordPress hosting to shared Linux hosting, plus cloud and reseller server solutions.

That said, we’ve seen SiteGround develop exponentially over the years to host not just small and medium-sized websites, but also large, high-performing platforms. And the corresponding numbers prove that things have been going well so far- the service ultimately hit 1,000,000 hosted domains in 2017.

Currently, SiteGround boasts of hosting more than 2 million domains and growing. Quite admirable, to say the least. But, you know what’s more interesting? Well, the fact that the client satisfaction rate here is reportedly 97%. And the amazing thing is that they get the same high satisfaction rate year after year.

Speed and Performance: Is SiteGround Fast?

Well, it just so happens that SiteGround’s main site is filled with multiple promises about boosting your website’s loading speeds. So, I was particularly curious how a quick speed test would pan out.

But, before we even proceed, let’s be honest about one thing. Website speed depends on several different variables, some of which are not entirely defined by your hosting service provider.

Consider media, for example. The sizes of the images and videos you upload to your site greatly influence the corresponding loading speeds. The best your hosting provider can do is implement features to accelerate server response times, and the rest is usually up to you. That’s why relying on just the page loading times would be a flawed approach.

So, here’s the thing, I decided to pay close attention to a parameter that’s entirely managed by hosting service providers- Time To First Byte, otherwise known as TTFB. It’s fundamentally the time the host server will take to relay the first byte of the webpage in response to a request.